On December 9, Moscow hosted the Peering Forum MSK-IX 2022 organized by MSK-IX for the 17th time. This is an annual conference on communication networks, as well as the services provided with their help. After a two-year hiatus caused by the COVID-19 pandemic, this year the event was again held in person and was attended by more than 500 participants. 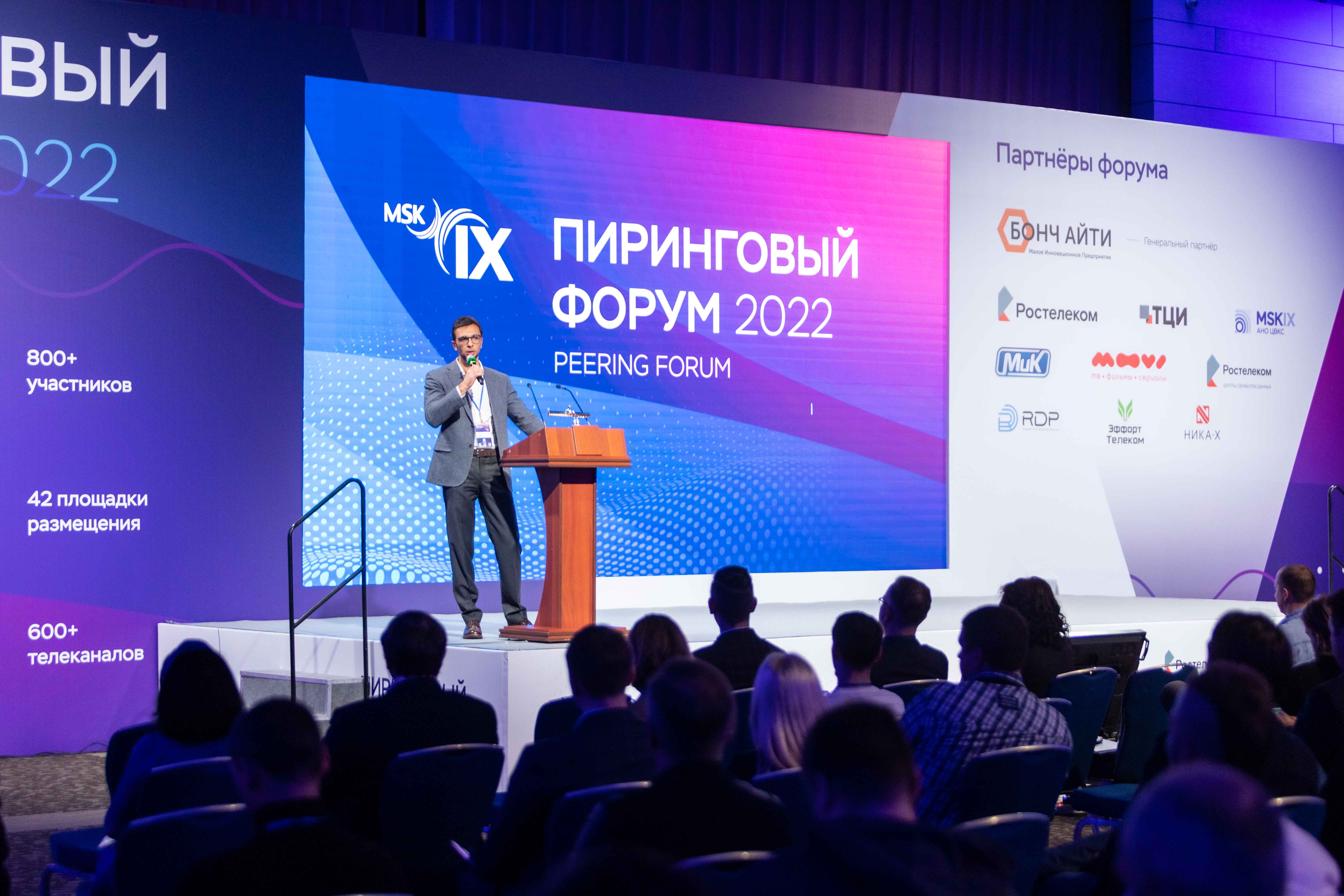 After a forced hiatus, members of the p2p community, representatives of IT and media companies, network service providers and data center operators have once again gathered in one place to discuss the most pressing issues in the industry, share news and exchange expertise.

The conference was opened by Yelena Voronina, Advisor to the MSK-IX General Director. Not only has she led the company since its founding in 1995, but she also initiated the Peering Forum, a platform that brings together hundreds of online community professionals, providing them with the opportunity to discuss issues, share best practices and unique case studies.

This April, Yelena Voronina transferred her title, MSK-IX General Director, to Yevgeny Morozov, who continued this role of the conference. He greeted all the forum participants, saying that the company was marking its 27th anniversary this year, most of which it is celebrating with friends, partners and clients, and summing up the results of the year with them at the Peering Forum. Then Yevgeny Morozov set the tone for the event, outlining the main trends and challenges in 2022 in the IT and telecom industry, and he briefly spoke about the new projects of MSK-IX and announced the most interesting topics to be presented at the forum.

Rostelecom Data Processing Center CEO Sergei Bochkarev delivered his welcome remarks at the forum. He thanked the MSK-IX team for their contribution to the development of the internet infrastructure and the base for building network services.

The Network Services stream and the panel discussion that took place at it were of particular interest to the audience. Taking part in it were Vladimir Bengin, Director of the Cybersecurity Department of the Russian Ministry of Digital Development, Communications and Mass Media, Alexey Kachalin, Deputy Head of the Cyber ​​Defense Center at Sberbank, Director of VK Operations Alexey Bazhin, General Director of RU Center Andrey Kuzmichev, and Vasiliy Dolmatov, Head of Advanced Research Department Kriptonit. The discussion was moderated by Alexey Rogdev, General Director of the Technical Center of Internet. The experts discussed the specifics of organizing business processes under the sanctions, issues of cybersecurity and import substitution in the telecom industry. They also talked about the interaction between the state and business in the field of regulation of the certification market.

As part of the Connectivity stream, Oksana Antipenko, Head of Sales at MSK-IX, spoke in detail about the new features of the MSK-IX multi-service platform for secure traffic exchange. Grigory Kuzin, director of the MSK-IX Medialogistika project, reported on the main challenges faced this year: ensuring the security of television signal delivery, maintaining and expanding the range of TV channels, and curbing price increases. All of these were successfully dealt with.

Oksana and Grigory also awarded key partners of the company, noting their contribution to the stable development of the network infrastructure and the numerous services based on it.

The Infrastructure session was opened by Alexander Ilyin, MSK-IX CTO, who noted that network security has become an important topic over the past year. He gave examples of specific solutions and offered recommendations for implementation.

Qrator Labs R&D engineer Yevgeny Bogomazov elaborated on this, talking about the fact that since the beginning of 2022, about 4,500 traffic routing leaks have been recorded and about creating a solution that will effectively deal with them. Yandex network expert Alexander Azimov shared interesting information about the complex mechanisms of traffic delivery.

The Medialogistika stream was devoted to topical issues and trends in the development of the market at the junction of media and telecom. Two panel discussions were held there on the most notable trends in 2022: content import substitution and entry into the market of smart TVs under domestic brand names in digital ecosystems: Yandex, Kion, Sber, and Tricolor, that now occupy the niche left by Korean vendors that have left Russia.

At this session, well-known analysts and representatives of leading companies in the media and telecom industry, noted that we will see the main volume of Eastern content from countries such as Iran, India, Türkiye and others, which will replace Western products, next year since it takes time to adapt. And the new smart TVs from Russian manufacturers will not only seriously compete with Chinese brands, but will also be in great demand among domestic consumers, due to the fact that they are an important part of the digital ecosystems popular in Russia.

The streaming sessions concluded with Grigory Kuzin’s presentation of a new MSK-IX platform, called Mediabaza. It is a B2B platform for distribution of downloadable content, which can be used by producers to find buyers, as well as broadcasters and online services that want to add new titles and programs to their offerings.

The Open Internet stream was dedicated to developing the global network and ensuring its stability across Russia. Maxim Burtikov, Coordination Center Director for External Relations in Eastern Europe and Central Asia at RIPE NCC, said that the main work of the organization is the idea of ​​an internet based on trust and cooperation. He noted the importance of the infrastructure integrity of the internet, regardless of the political situation. Sergey Mitin, Deputy CTO for Network Infrastructure at IVI, gave a report on the peculiarities of using the IPv6 protocol by content players, emphasizing that today it is used more by operators than by content providers. Selectel CTO Kirill Malevanov discussed the topic of optimizing internet connectivity for cloud providers, describing examples of building traffic management processes to ensure the best internet connection connectivity for end users.

This year, information security was the cross-cutting theme of the Peering Forum. It is not surprising that the panel discussion, which took place in the stream under the same name, held the attention of the audience. Its moderator, Positive Technologies Chief Architect of Strategic Projects Mikhail Kader, discussed with representatives of industry companies the dynamics of the growth of DDoS attacks on Russian websites and their impact on traffic redistribution and network connectivity. In general, despite the fact that the number of DDoS attacks in the first quarter of 2022 increased by three times compared to the same period in 2021, this did not have a significant impact on network connectivity and did not cause significant damage, thanks to successful counteractions by cybersecurity specialists.

MSK-IX DAY in Rostov-on-Don
Contact us
Thanks for your request!
Sending form failed - try later